Benefits of The No fail System.

I often hear the question, “How is Thailand so far behind in Esl?”. It may come as a good question for Thai people to debate but for an Esl teacher that answer has been clear cut in stone for a long time. Simply put, you’re not allowed to fail your students.

It still amazes how poor some of the English in Thailand is. Just the other day I went to the hospital because I had a infection with my wisdom teeth. I tried explaining to the doctor what the problem was and it was as if I was speaking an ancient language.

I consider myself to be pretty decent when speaking Thai but when I go to the hospital I always tell the nurses that I wish to speak in English.  There is no amount of money in the world I wouldn’t spend to be in good health. So when it comes to going to the hospital I want to make sure that I can fully express my current condition.

How can one get so far in a field where it is somewhat important to have English ability? The easy answer is because of the no fail system.

Take for instance a kid in a government school. Lets say his name is… Boss, that’s a pretty common nickname among the Thai male students.

Boss is in the Mattayom-4 English program designed to help the students think critically and articulate their thoughts. For this objective to be met, Boss will need to already have basic English skills which should’ve already been proven, given he has made it this far. Let’s just say he needs to be able to understand and respond in English.

The problem for Boss is that he constantly relies on his classmates for help. All through out his school life up until now he hasn’t learned anything more then the most common phrase Thai people say. “I’m fine, thank you and you?”.

So when his teacher calls on him to answer a question he has no idea whats going on. All he knows is this farang is asking him a question and he quickly looks to his left or right hoping his friends will explain to him in Thai what his teacher just said.

This has far turned into a habit for Boss because all throughout his school life he’s been doing this and still is able to move up to the next level. Boss’s English teacher is obviously annoyed because the the teacher has seen Pratom 1 students with better English. Not only that but he is a distraction to the class, meaning that the teacher must constantly slow the progress of the class to make sure he is somewhat on the same understanding as the other students.

Boss constantly copies his homework and has the neck a giraffe would be jealous of when it comes to taking test. All the meanwhile, the teacher is well aware of whats going on. The teacher constantly confronts him and asks him why he always copies and cheats. Boss simply lies through his teeth because he wouldn’t dare lose face admitting that he doesn’t have the ability to succeed in this class.

The teacher is in for a surprise though. Unknowingly, behind the teacher’s back the school sees that Boss got an F and if Boss fails the course then his family will lose face and may take him out of the program. If he is taken out of the program then that means less money for the school. So in an attempt to kill two birds with one stone( save face and make money) the school alters the final grades the teacher submitted.

Overnight Boss went from an Failure to a A-.

Boss rejoices and probably brags how he didn’t have to do shit in class and still got an A. All the while he will now have his parents convinced he is more than ready to move up to another level in English.

This is the benefit of the no fail system…

The student and their family save face… the school saves money… and everyone else loses.

Thailand will never be dominant in English until they are willing to get rid of this no fail policy. Could you imagine if they did? You can bet it’s would be messy. I reckon it would take a couple years and tears of students failing, falling behind and realizing they have to work much harder to get the next level.

There simply is nothing at risk for students. Sometimes I feel that education in Thailand is synonymous with the word ‘free-time’.

Yes the students are respectful and yes the parents pay a lot of money, but is that enough merit for a student to pass regardless of their ability?

Imagine a football player who gets to become pro regardless of his skill because his parents paid the coach a lot of money. Telling him he’s not good enough would only cause a loss of face.

In the end the only people that get blamed are the teachers. We are the scapegoats and to be honest it’s pretty lame. Our job is to teach you then test you on what we taught. Finally we give you a grade that measures your ability to grasp that concept. When you take that last part out of the equation then the whole process becomes meaningless with no end game. This is why education is not taken seriously. This is why the dumbest kid in the class can keep moving up to the next level. This is why Esl in Thailand will never change until the no fail system is acknowledged as the root problem in  poor education. 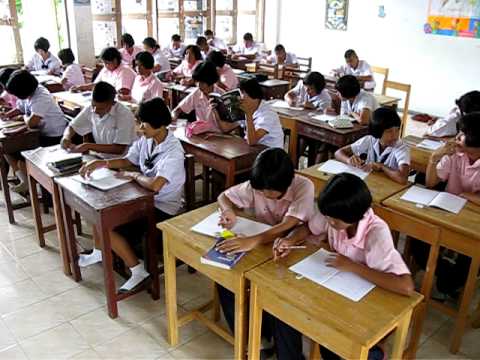 Two years ago, I was in this very situation with more than half of my class unable to even understand the word “English”! I feel fortunate now to be in a program where a majority of the kids can speak and understand just about everything I say. It’s just scary to think that one day the very same kid who copies and cheats on all of his work may well be an important figure in the future. How did he/she get there?

It just seems in Thailand its not about what you can do…It’s about who you know.